AN EXHIBITION that was to run at the Burgh Hall is available online until the end of July. 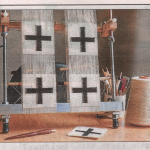 Called +St Bride, it is part of the series The Well at the World’s End by Alexander and Susan Maris, commissioned by Cultural Documents as part of its programme strand ‘Locating Lorne’.

The work started on February 1 this year, when Alexander and Susan Maris searched for, but could not find the old well of St Bride in a churchyard in Dunoon.

However, just over a week later, they received an email from Revd David Railton with news that he had found the remains of St Bride’s Well in the churchyard of Holy Trinity Church, Dunoon.

The couple said: “It took 40 days to weave this devotional work whilst all around, the world was unweaving into the chaos of the pandemic.

“It became clear that the original proposal for the exhibition at Dunoon Burgh Hall would have to change – to focus, without distraction, on the therapeutic symbolism of this singular tapestry.”

Sacred Wells are sources, or ‘springs’ of fresh, clean water and have become symbolic of wellbeing, healing and endurance.

Susan Maris combined the water from the Well of Schiehallion with lichen from trees surrounding St Bride’s Well in Dunoon to make an amber dye and produced a woven cross, to offer a symbol of reflection and mourning in this time of isolation.