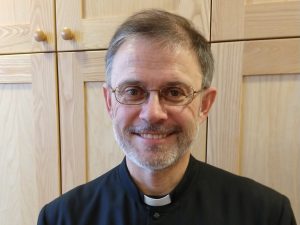 David Railton is currently vicar of Blackwell and Coniscliffe Parishes, Darlington in the Diocese of Durham.

In preparing to take up his appointment just after Easter, David said: “My wife Sarah and I are excited about our imminent move to this beautiful part of Scotland when I become Rector of Holy Trinity, Dunoon and St Paul’s Rothesay. There are many opportunities and challenges ahead for us, but we are looking forward to walking this next part of our journey with people in the church and also in the wider communities here, trusting always that God walks with us!”

The Rt Rev Kevin Pearson, Bishop of Argyll and The Isles, welcomes the appointment and said: “I am delighted that David Railton has been appointed Rector of the Linked Charge of Holy Trinity and St Paul’s. David has excellent skills that I am sure he will put to good use developing both churches and ministering in the local communities of Cowal and Bute.”

David Railton was born in Yorkshire and attended the University of Bradford where he graduated with a 1st class honours degree in Pharmacy. He worked as a pharmacist in Derby where he married Sarah in 1991. He gave up pharmacy to be ordained Deacon in 2008 and priest in 2009. David served his curacy in Derbyshire, then became vicar to three parishes on the edge of the Peak District before becoming vicar in Darlington.

He and Sarah have two grown-up children, Alice and Samuel, who live and work in London. When not working, David enjoys walking and Munro bagging, reading and cooking. He is also interested in history and sport.

Bishop of Argyll and The Isles