New Bishop ready to roll up his sleeves. 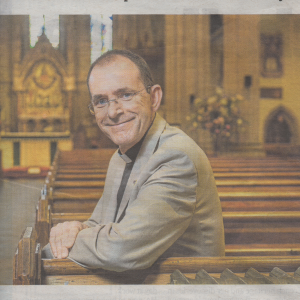 When the Very Rev Andrew Swift is consecrated Bishop of Brechin in St Paul’s Cathedral, Dundee, on Saturday afternoon, the ceremony will reach a potential worldwide audience of millions when it is live-streamed on Scottish Episcopal Church social media channels.

Yet as he reflects on the “privilege and the honour” that comes with overseeing 27 churches in the Diocese of Brechin – taking in Dundee, the southern Carse of Gowrie, Angus and the Mearns – Mr Swift is most looking forward to getting out into the local communities and getting to know the people he will serve.

“It’s a privilege and an honour to be picked to be the bishop,” said Mr Swift in an interview with The Courier at St Paul’s.

“The expectation that comes with any new ministry is enormous and it’s going to take me weeks, months and possibly years of listening to where people are coming from and understanding how I can help them. However, I also approach it with a large amount of trepidation as I think any sensible human being would.

“It’s a big big job – especially in the 21st Century, when the whole question of what religion means, ‘is it relevant in the world today?’ is an enormous question that’s asked all the time.”

Born in Aberdeen in 1968 and raised in Dunblane, Mr Swift has been dean of Argyll and the Isles since 2012, rector of Dunoon and Rothesay in that diocese since 2010 and a member of the Scottish Episcopal Church General Synod from 2011.

He has been a depute lieutenant of Argyll and Bute since 2016. He previously served in the diocese of Gloucester, following a career as a shipbuilding executive, civil service research engineer with the Admiralty and a junior officer in the RAF. He studied at the universities of Edinburgh, Aberdeen and Oxford.

Married to Mary, the couple have three children – Frances, 16, Peter, 19, and Eleanor, 21. For leisure, the family enjoy narrow-boating on the Scottish canals with their collie, Molly.

Mr Swift is excited to be taking up his post just weeks before the opening of the V&A in Dundee. Having literally moved to the city with his family over the past few days, he is excited by the “wow factor” around the city’s £1 billion waterfront.

But like the Right Rev Dr Nigel Peyton, who held the Bishop of Brechin post before him, he is also conscious of the challenging socio-economic issues facing many in the city – and he says the church will not shy away from “rolling up its sleeves to get its hands dirty”.

Printed in the Dundee Courier
21 August 2018