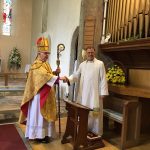 THE ARGYLL weather did not dampen the spirits up at Holy Trinity and the church was packed last Saturday as the new Rector, the Reverend David Railton, was collated by the Bishop of Argyll and The Isles, the Very Reverend Kevin Pearson. It was a splendid ceremony attended by local clergy, by members of David’s […] 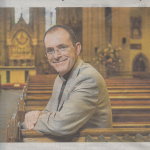 New Bishop ready to roll up his sleeves.

“It’s a privilege and an honour to be picked to be the bishop” The Very Reverend Andrew Swift When the Very Rev Andrew Swift is consecrated Bishop of Brechin in St Paul’s Cathedral, Dundee, on Saturday afternoon, the ceremony will reach a potential worldwide audience of millions when it is live-streamed on Scottish Episcopal Church […]

Consecration of Bishop of Brechin

The service of consecration of the Very Rev Andrew Swift as Bishop of Brechin will take place on Saturday 25 August 2018 in St Paul’s Cathedral, Dundee, at 2pm. The occasion is admission by ticket, but there will be some unrestricted places in the Cathedral. Holy Trinity, Dunoon, along with St Paul’s, Rothesay, are organising a […]

Our assistant curate, Rev Elaine Garman, has announced that she is to be the Rector of St John the Evangelist, Forfar. She will remain with Holy Trinity until early summer in order to finish her curacy before re-locating to the Diocese of St Andrews, Dunkeld and Dunblane to take up her new post. She will […] 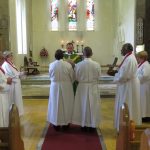 The Scottish Guild of Servers at Holy Trinity

On Sunday 27 August 2017, Julie & Geoffers were admitted to The Scottish Guild of Servers during our regular morning service. They were presented with their ribbons and medals by the Rector Very Revd Andrew Swift. Other members of the Holy Trinity Priory were in attendance at the event. 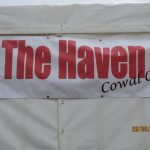 The Haven at Cowal Games

Holy Trinity Church members once again took part in the Haven café at the Cowal Games again this year. This was an ecumenical venture involving most of the Dunoon churches. Thanks to our many visitors, £800 was raised in aid of the Cowal Hospice.

Sung Compline on Wednesday at 19:30 – all welcome

General Synod 2015 approved the Global Partnerships Committee motion that members of the Scottish Episcopal Church be encouraged join the Scottish ecumenical initiative, promoted by Christian Aid, in praying for Israel/Palestine on the 24th day of every month. This initiative was supported by a motion which called for the recognition and support of the […]

The Haven at Cowal Games

Dunoon churches are repeating “The Haven” café at the Cowal Highland Gathering on the 26th and 27th August 2016.  The café tent on the hill in the stadium has run each year since 2012 to offer a covered, family-friendly seating area at the gathering.  This year, once again, the café offers covered seating with tables, […]

Our Church is Open Daily